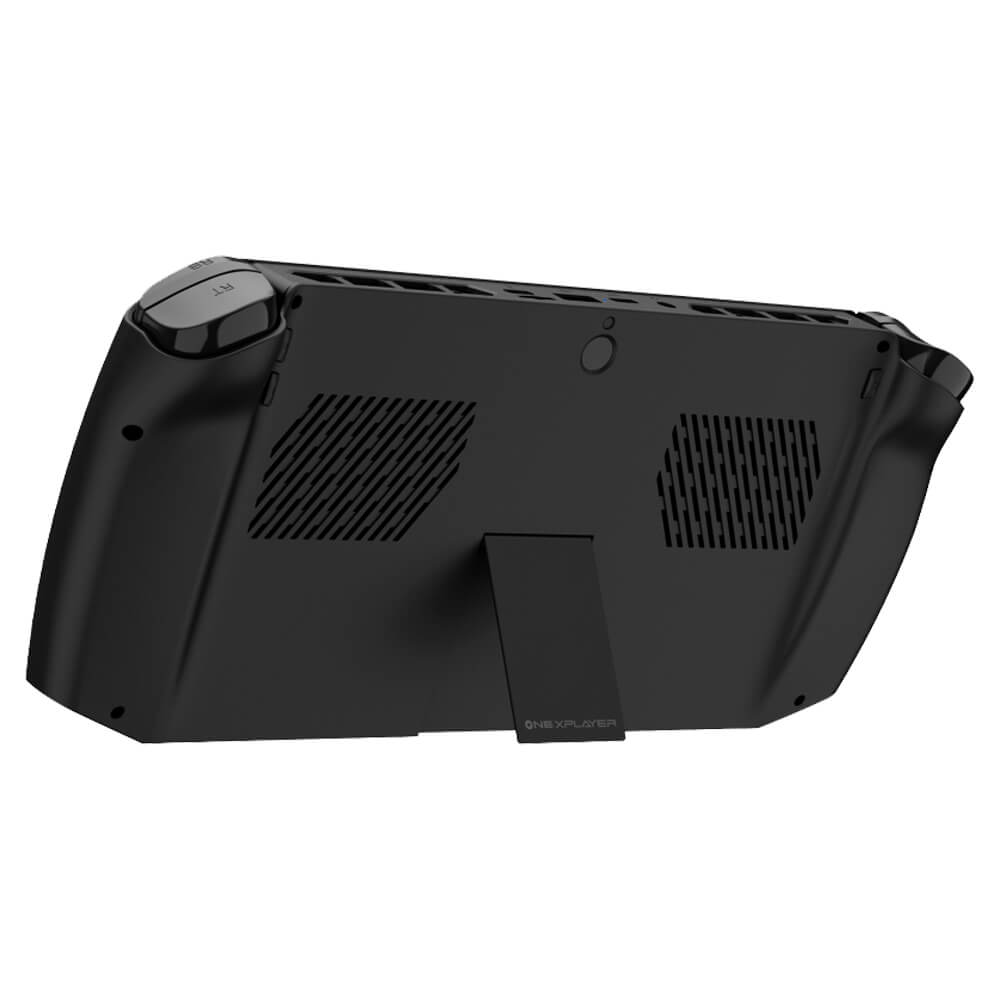 Playing the latest games, the ONEXPLAYER 1S is the perfect choice for a gaming handheld.

Coming with Intel Core i7, the ONEXPLAYER 1S Processor is an 11th generation Intel Processor with 4 Real Cores and 8 Threads. The processor can boost up to 4.50 Ghz.

Also coming with 12MB three-level cache. This makes the ONEXPLAYER Gaming Handheld a beast for its size.

It can handle Chrome!

And for storing your game library, the ONEXPLAYER 1S handheld comes with 1TB of PCIe 3.0×4 NVMe. Experience speeds up to 2400MB/s

Amazing for an Handheld

And to keep it topped up, in the box you’ll find a 65W PD-Compatible Charger.

You know it! Windows 10 Home is pre-installed onto the ONEXPLAYER handheld game console and you can upgrade to Windows 11 for free once it’s released.

Stunning Graphics, in your hands

Not only do you get a powerful processor, the ONEXPLAYER 1S Gaming Handheld comes with Intel’s Xe Graphics Chip built-in. This means you can play many Titles at native 2.5K Resolution with High Settings.

The Intel Xe Graphics found in the ONEXPLAYER 1S Handheld Gaming PC by One Netbook is comparable to an Nvidia MX350 dedicated Graphics Card.

This allows the ONEXPLAYER PC Gaming Handheld to run games released in the recent years at a respectable FPS.

This portable gaming handheld can also emulate Retro Gaming Titles with ease, allowing you to even emulate PlayStation 3 titles. This is a breakthrough in computing, especially in this form-factor.

Now would you look at that? The ONEXPLAYER 1S screen is a stunning 8.4″ IPS Display. This covers 100% of the sRGB Color Gamut and it has a 178 degrees viewing angle. The sharp contrast and popping colours is something One Netbook are known for and the ONEXPLAYER Handheld delivers!

The 8.4″ Display is also a touch-screen with 10 points of recognition and is compatible with the One Netbook Stylus.

The ONEXPLAYER Handheld is a fully thought-out game console and the Gaming Experience is top-notch. Apart from the beautiful display, you have all the tools you need to get your game on!

Also present is a button to invoke the software keyboard for quick in-game chat.

How do you start? With the start button (yes, we thought about that joke), and you’re also getting a back button.

The ONEXPLAYER handheld console also comes with a Turbo button – Press it!

Super device. Coming from a Nintendo switch this is much larger super graphics played tekken 7 on high settings 60fps .battery not very long .and windows not really suited to handhelds. But overall well recommend.waiting for steam deck see how that turns out.

This is a beast of a machine. I know it won't play AAA games at full resolution and framerate, but it's solid for older pc games and excellent for emulation on the go. Screen is beefy but beautiful to look at.

Having owned the onexplayer 1s for a couple of weeks now I am blown away at how good it is. As an owner of a gaming pc, gaming laptop, switch Oled and Xbox series S the onexplayer is now my go to machine.

So the good things.. the screen is incredible, so clear, vibrant which I can watch for ages unlike my switch. This is a fast machine and I play rogue lites in High settings at native resolution 60fps and AAA titles at low/medium settings at a playable frame rate. Battery life seems to be about 2.5 hours of gaming time. The charger included is fast! Set up was really easy and I was playing within 20 mins of it arriving. It’s really comfortable to hold and the stand is perfect. This is a top quality machine, well worth the price!

The not so good… the sound is ok but not amazing, however use headphones and it’s fab!

If you are like me you will watch lots of reviews. Some say the fans are noisy.. they aren’t and you can cut the fan noise down by holding the mute button down for 2 seconds. The only other thing is cursor drift however when this happens hold down the 2 small buttons for 2 seconds and it stops.

The final thing.. this machine is incredible and I have now cancelled my steam deck order it’s that good. I have purchased an EGPU unit from razer and put an old 5700xt card in it. This box sits in the corner and I can connect a thunderbolt cable between that and my onexplayer .. the result AAA gaming in ultra on my onexplayer or external monitor 60fps all day long!

Droix has been perfect - very informative, great price and quick delivery. The best! Can’t fault at all cheers!

I was tired of waiting for the steam deck, and instead plumped for this. and i am so glad i did. I have upgraded to Windows 11, and it runs every game I have thrown at it in full resolution and more importantly very smoothly. it is definitely a powerhouse. There may be some fringe cases with games not playing nice with the XE graphics, but these are few and far between, i caw graphical glitches in COD WWII. but overall very happy, I will be purchasing the steam deck when my reservation is finally fulfilled to compare, however I suspect I will be selling that forward instead of this as the screen is double the resolution and beautiful to play on. and kudos to Droix for quick fulfilment and delivery (Next Day)

So, I originally backed the onexplayer on Indigogo, and later sold it in favour of buying the updated onexplayer 1S version from droix.co.uk ( to get UK service and UK warranty). This beast of a device is amazing. I have owned a number of GPD devices and have enjoyed all of them, however the onexplayer has so far been the best. Its got an amazing screen (much better than my OLED switch), and being an older gentleman, I can see the screen and read the text without issue. Its built very solidly, and feels very premium. And boy is it powerful as well. With the latest intel drivers, I have been enjoying some amazing games on the go (well, for me, that means sat on the couch or lying in bed). Doom Eternal, runs like a dream (and so much better than the Switch version), Forza Horizon 4 and 5, amazing (a few graphical glitches, but runs flawlessly).

I've been enjoying some older games as well, such as Need for Speed Hot Pursuit Remastered, the Tomb Raider games, We happy few, Strange Brigade, Hades, Mirrors Edge, Left for Dead 2, Back to Blood, and a lot of others. It really does handle games very well. There are still numerous issues running the very latest games, so don't be expecting to play Deathloop. What I find though, is it doesn't hurt trying out a game from steam, and if it don't work, just refund it. Also, checking out various youtube videos, and if a you can find a video of a game running on the oxp, or the intel GPD devices, you should be good to go.

Often, its nice to play games on this as opposed to the Switch as the graphics and performance is so much better. Why play a game at 30fps, low resolution and muddy graphics, when you can play at 60fps, higher res.

What I like : Emulation (PS2, some PS3 and Switch, and the usual older system's), Screen, Controls, Speed, Great games, flexibility.
What I don't like : Rumble is too harsh, storage space a little limited, SD Card reader is slow

Do your self a favour if you get one. Buy the case to keep it protected, and install a game launcher, something like playnite, to get a console like experience on it.

Yes, its expensive, but if your looking at it, you already know that. Best thing about it over something like the switch : Cheap PC games - sales are so much better on PC, better performance.

Added to wishlistRemoved from wishlist 1
Add to compare

The GPD XD Plus is the ultimate Android gaming tablet with a Mediatek MT8176 processor, PowerVR GX6250 graphics, 4GB RAM and 32GB storage. There are dual ALPS analog joysticks, D-Pad and 12 gaming buttons with Omron microswitches. If you are looking for an Android Retro Console then look no further, this easily handles all your favourite retro consoles. You can also connect to your TV to turn it into a big screen Android console.

Best value
Added to wishlistRemoved from wishlist 13
Add to compare

​Note: Retro Power colour on pre-order ; By placing a pre-order, you will be charged upfront for the cost of the device.​

Added to wishlistRemoved from wishlist 4
Add to compare

Added to wishlistRemoved from wishlist 7
Add to compare